The Caravanserai of the Egyptians in Tripoli, Lebanon

Thanks to Swiss and international reconstruction aid, the 700-year old caravanserai will be restored and will once again become an inviting place to stay. A new meeting place is being created – also for tourists.

The caravanserai is part of the colourful and lively souk, in the oriental market in the very heart of the old city. A new centre is emerging here: more life, more security.

The co-owners, the Minister of Culture, the General Directorate of Antiquities, the Mayor, the Chamber of Commerce, and last but not least the Mufti and the Islamic foundations are all on board.

Important decisions will be taken by the general assembly of co-owners. The co-owners’ association was founded on Jan.29 2020. The board of the said association was constituted on Oct.28 2020. (All documents are filed and registered by a notary in Tripoli).

The project in Tripoli: To renovate the Khan el-Masriyyin caravanserai and create the "Roxelane" boutique hotel

The project in Tripoli: To renovate the Khan el-Masriyyin caravanserai and create the "Roxelane" boutique hotel

Photographs of building and courtyard (2018) 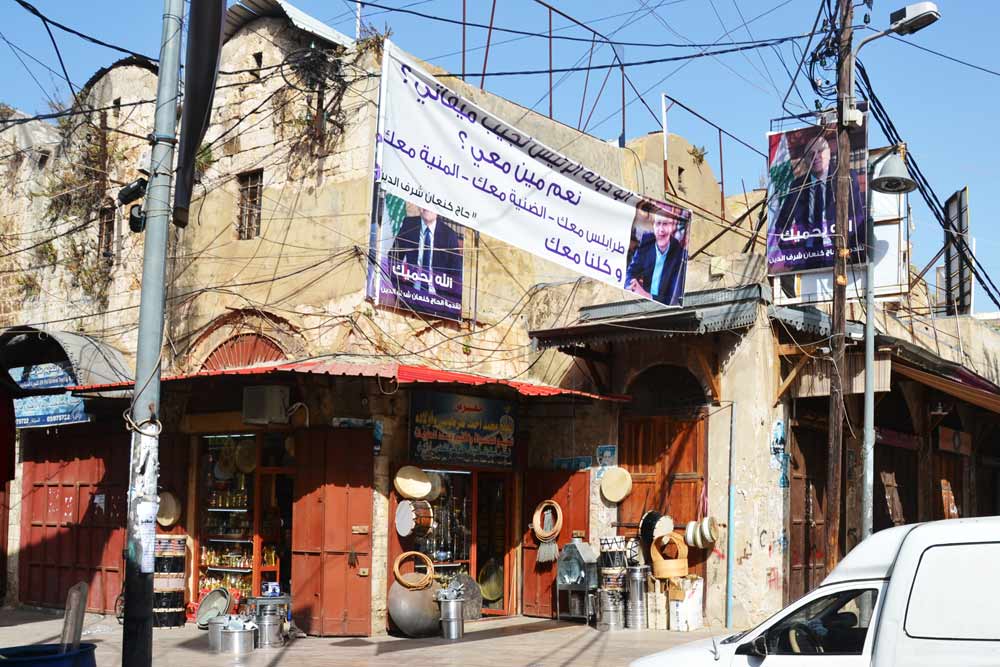 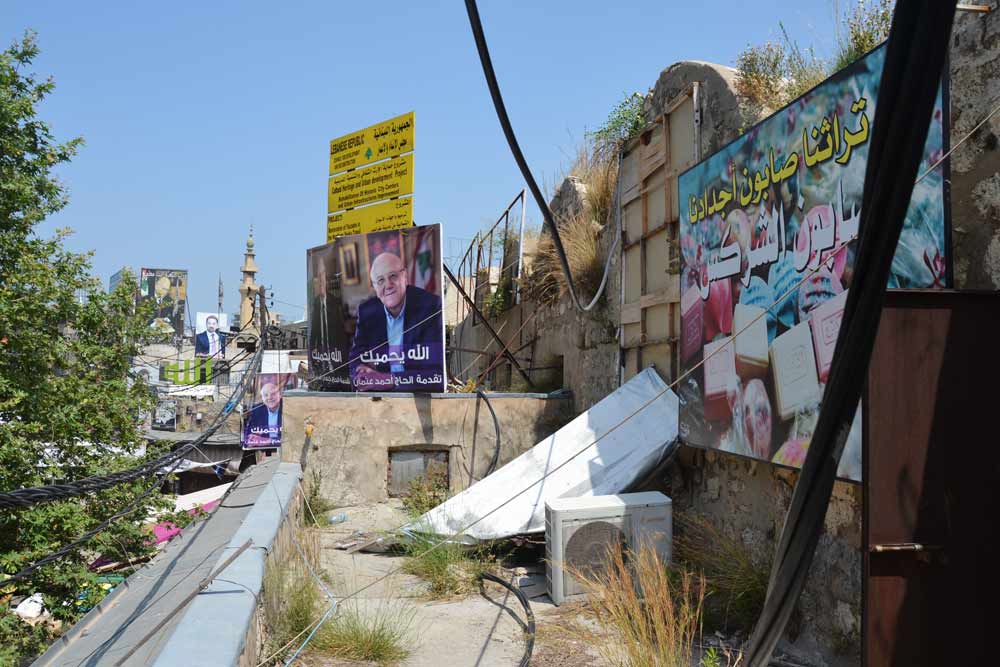 the exterior facade of the khan before restoration (5.2018) 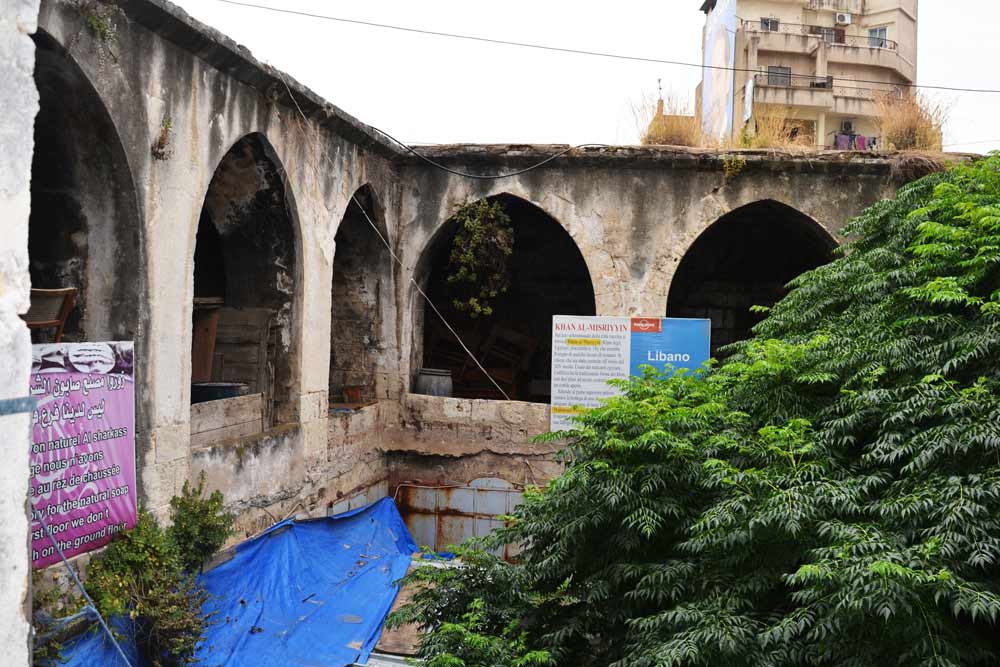 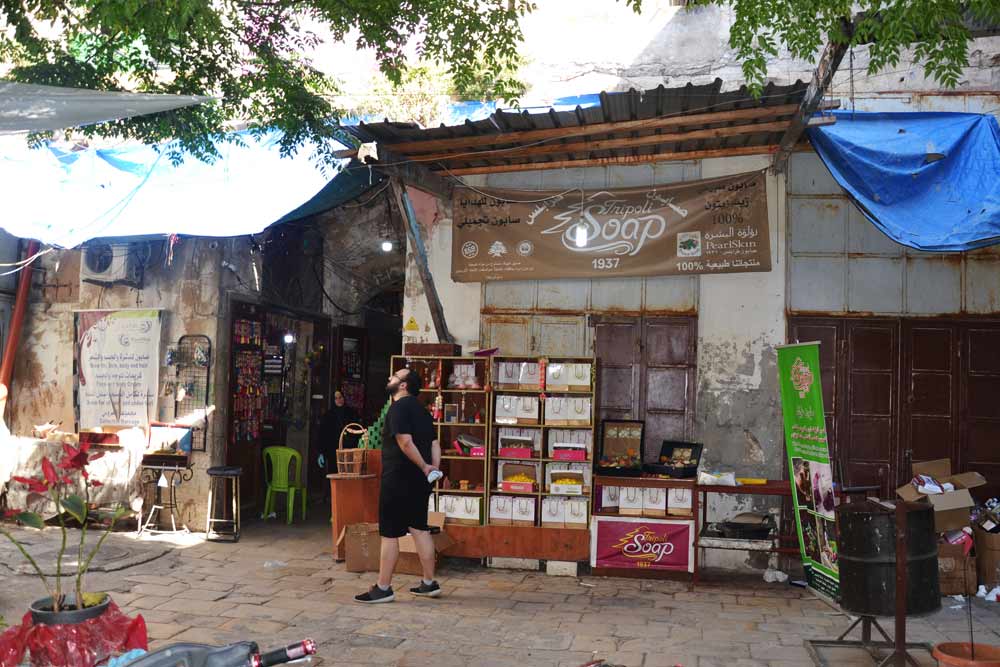 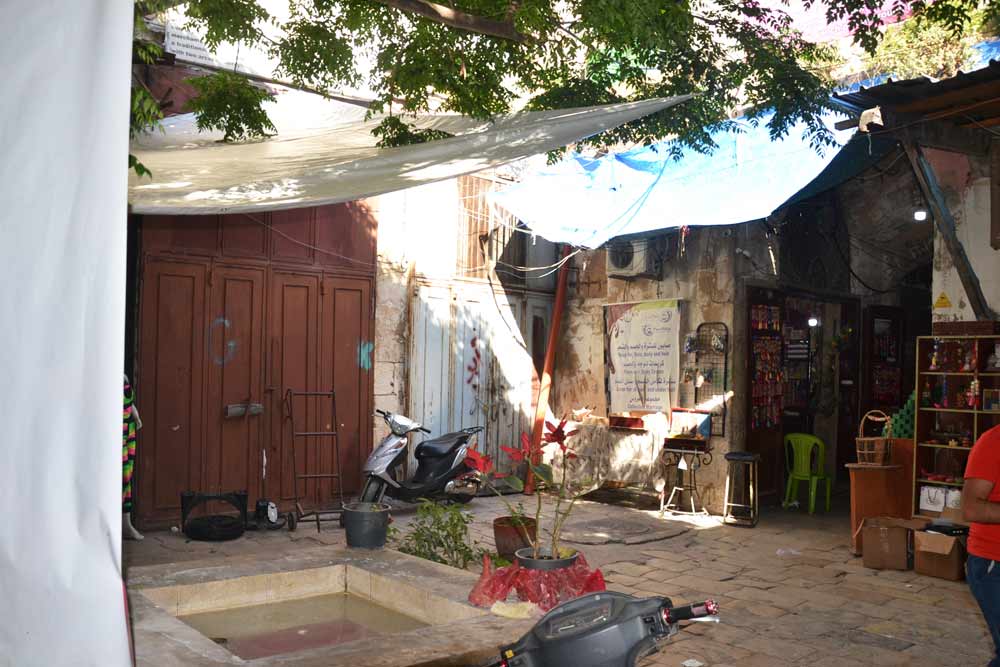 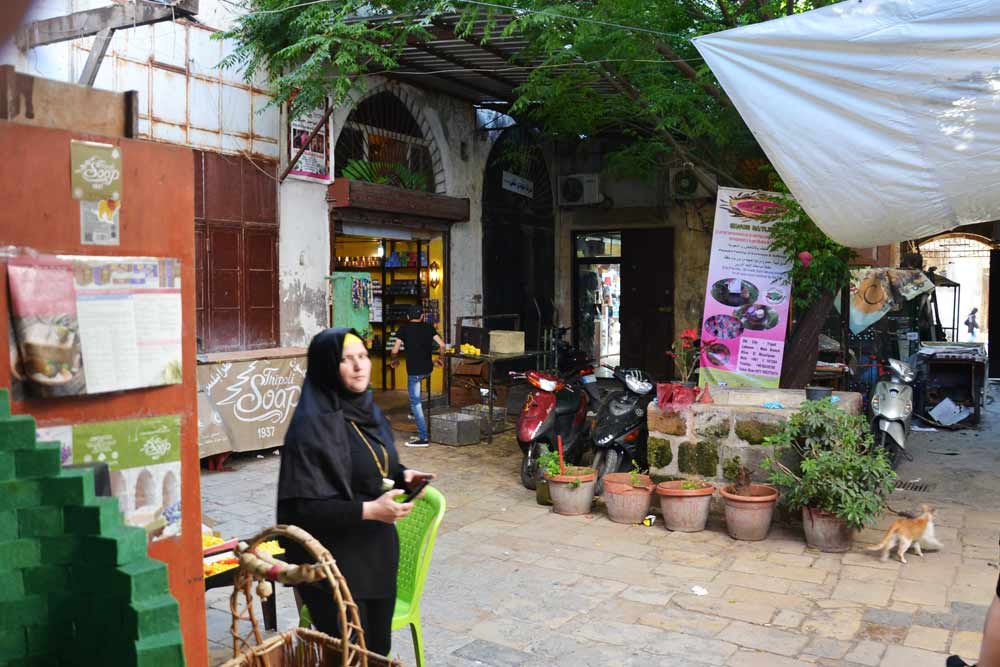 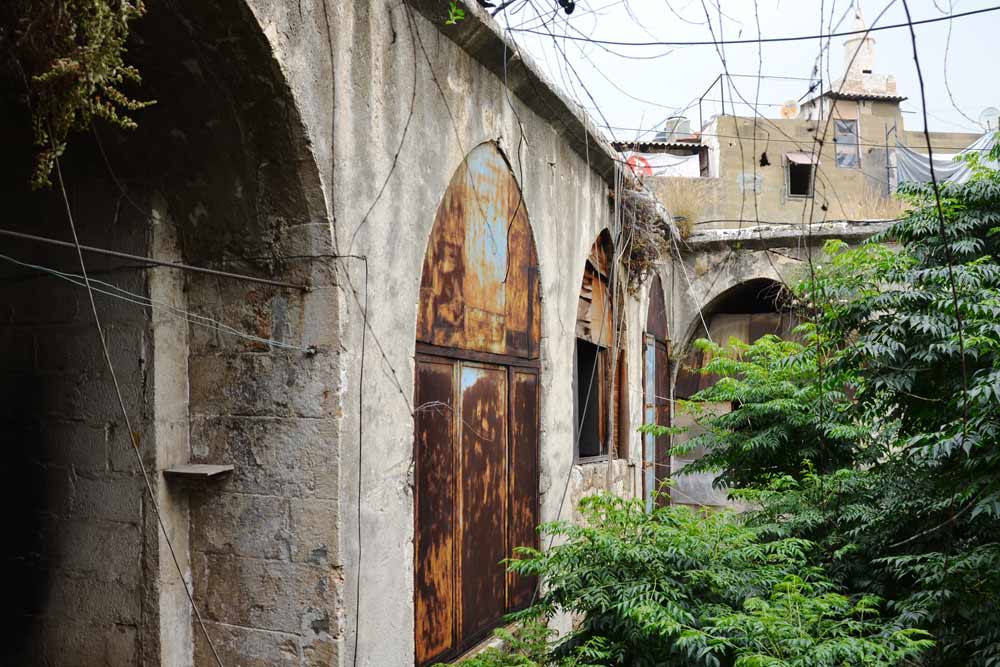 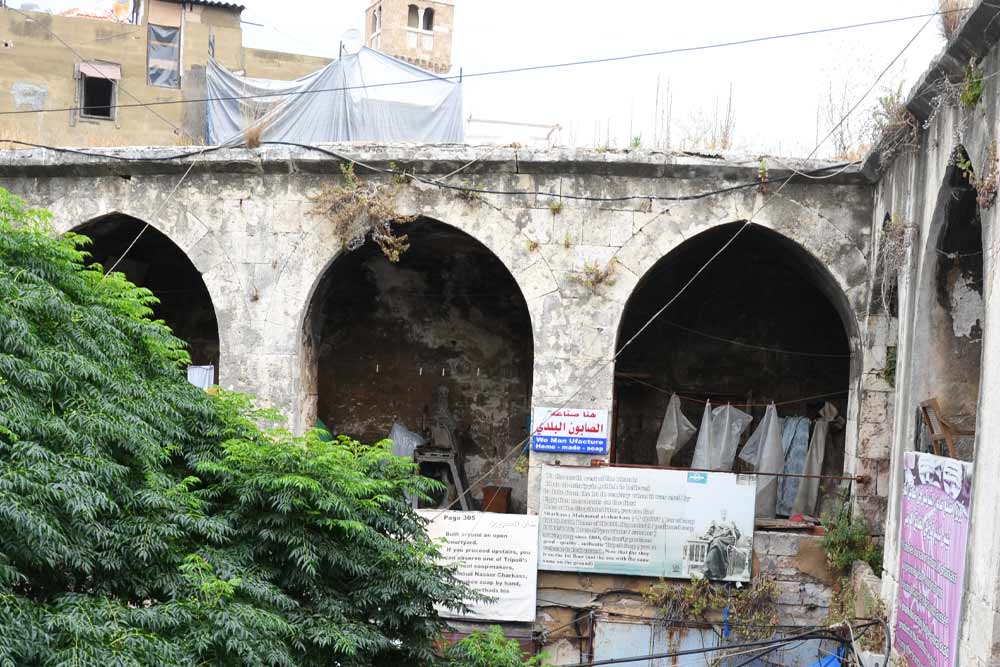 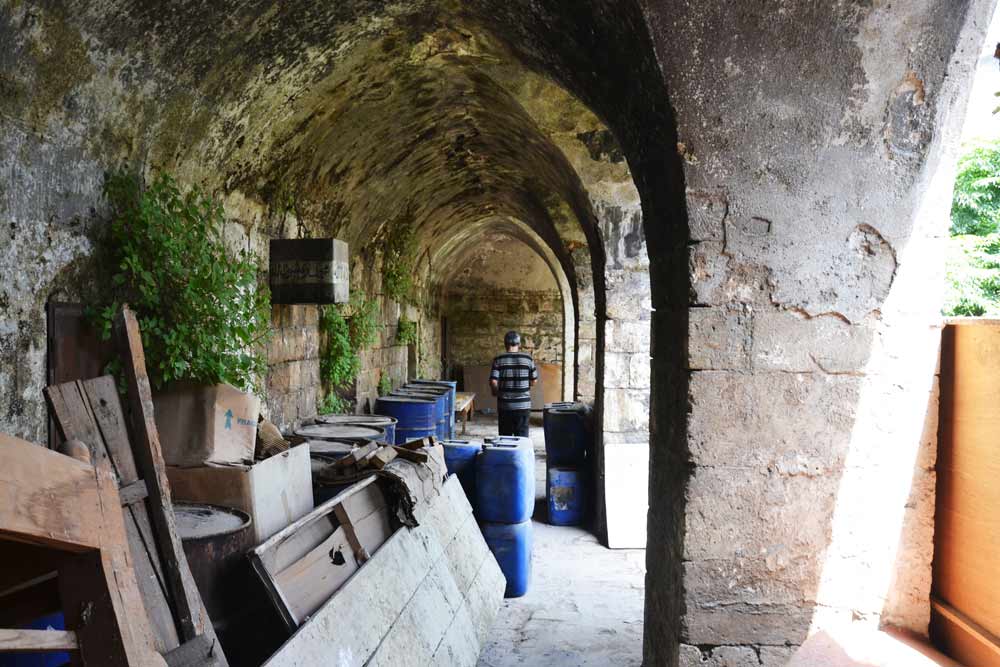 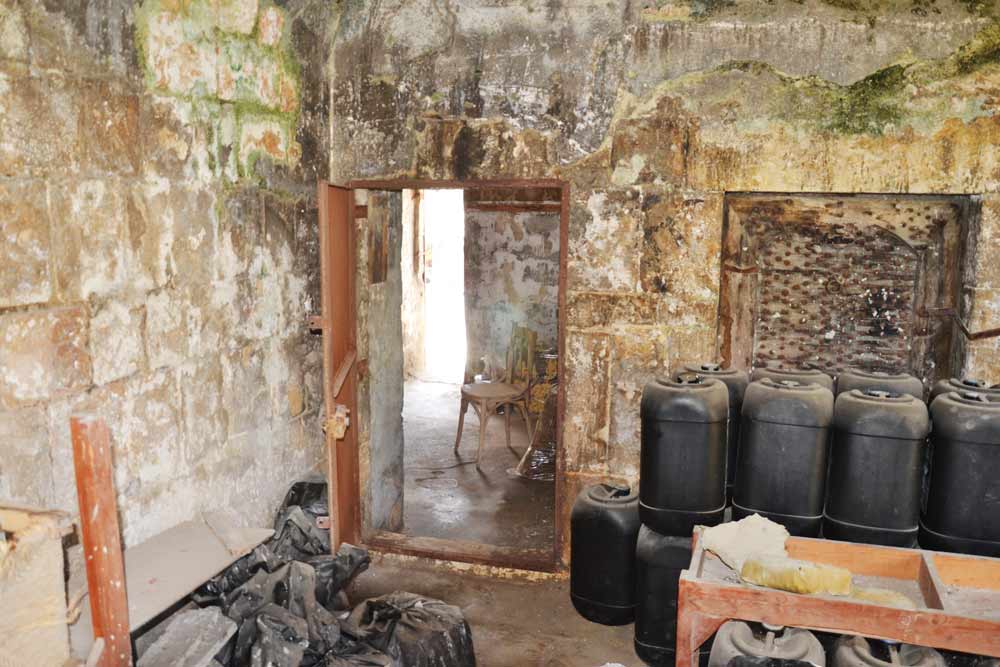 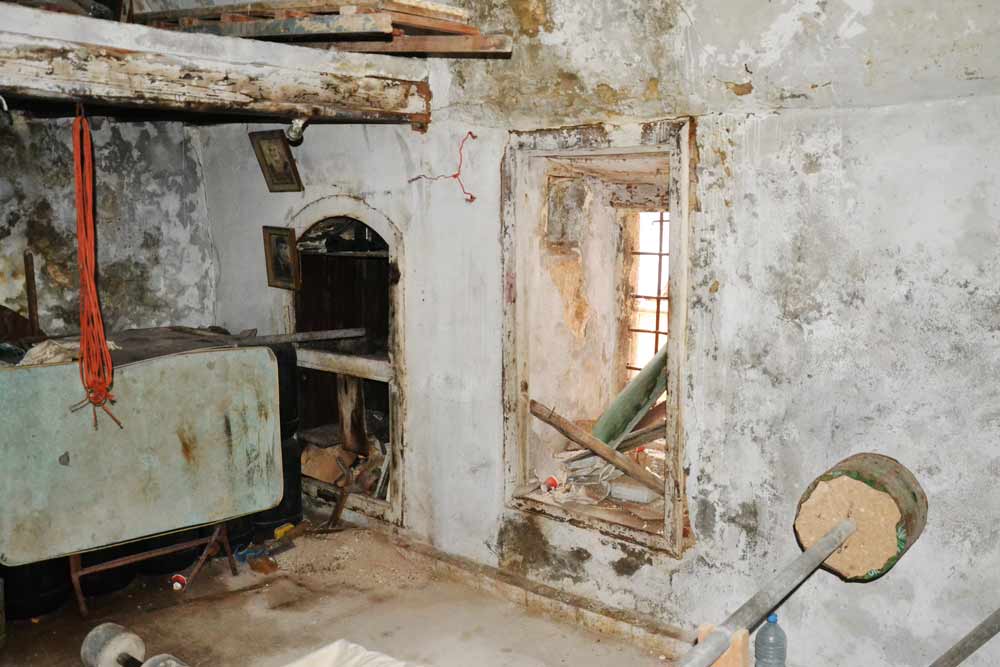 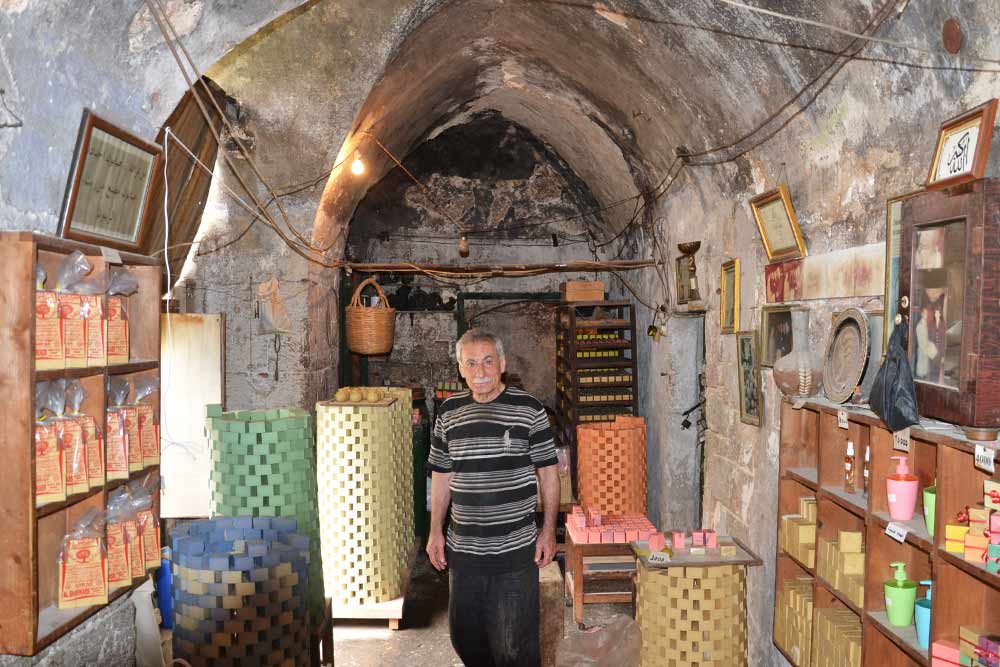 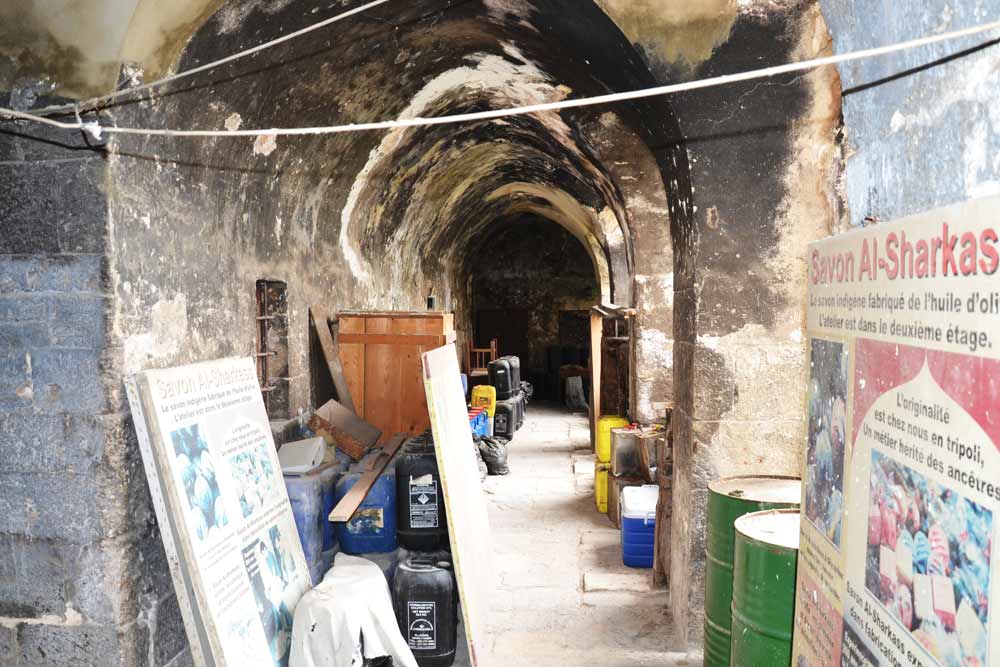 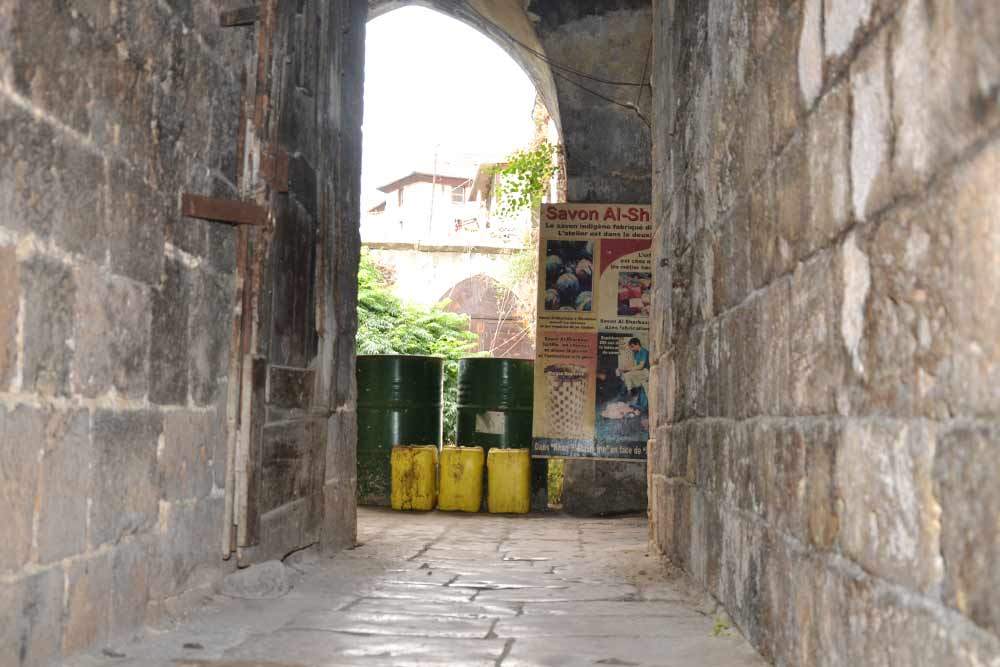 the upper floor of the khan before restoration (5.2018) 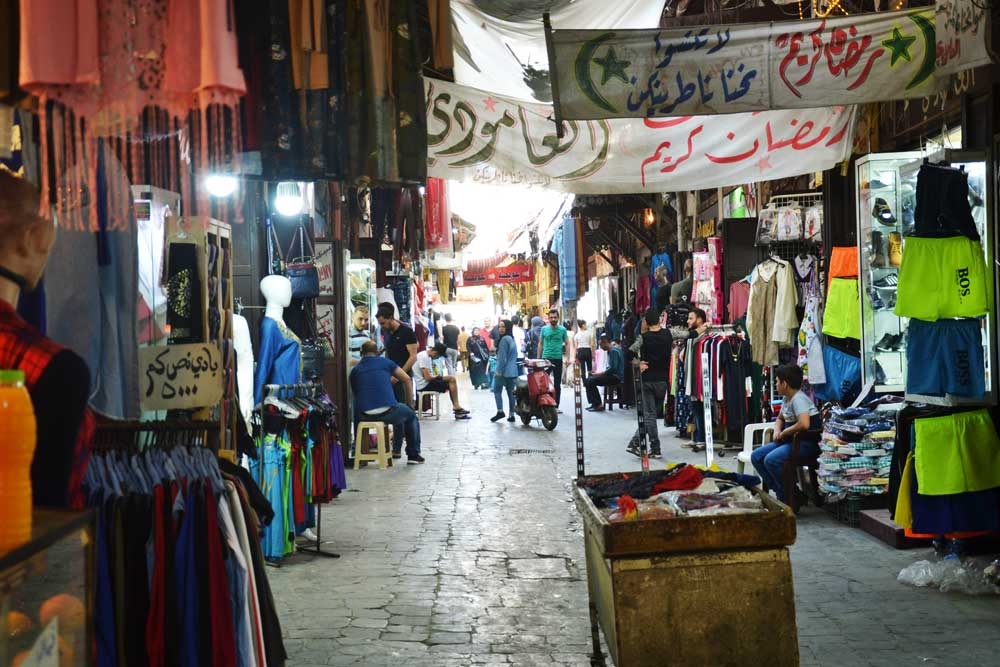 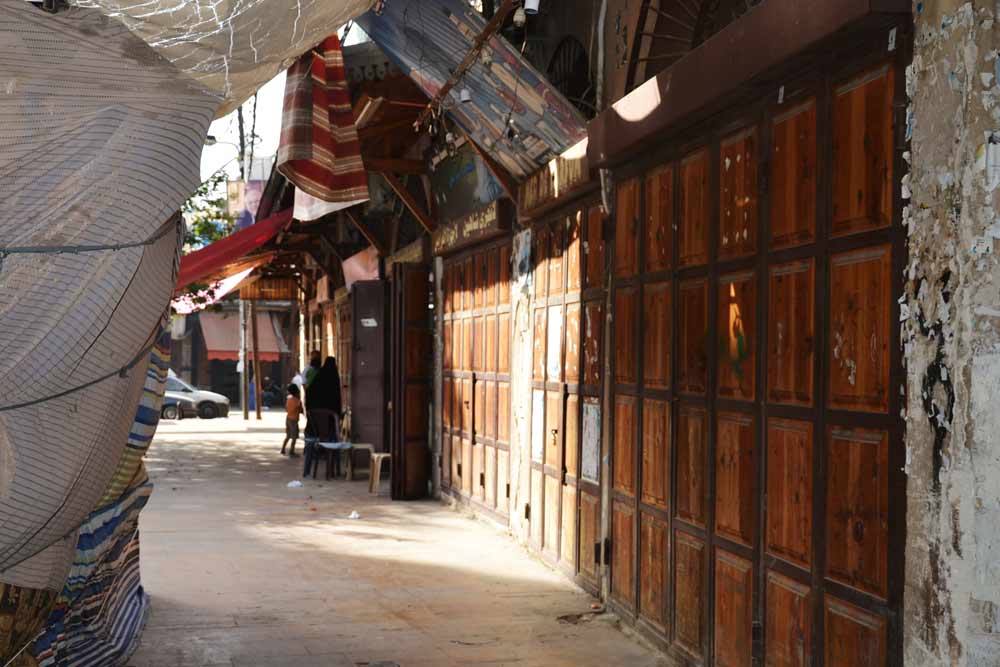 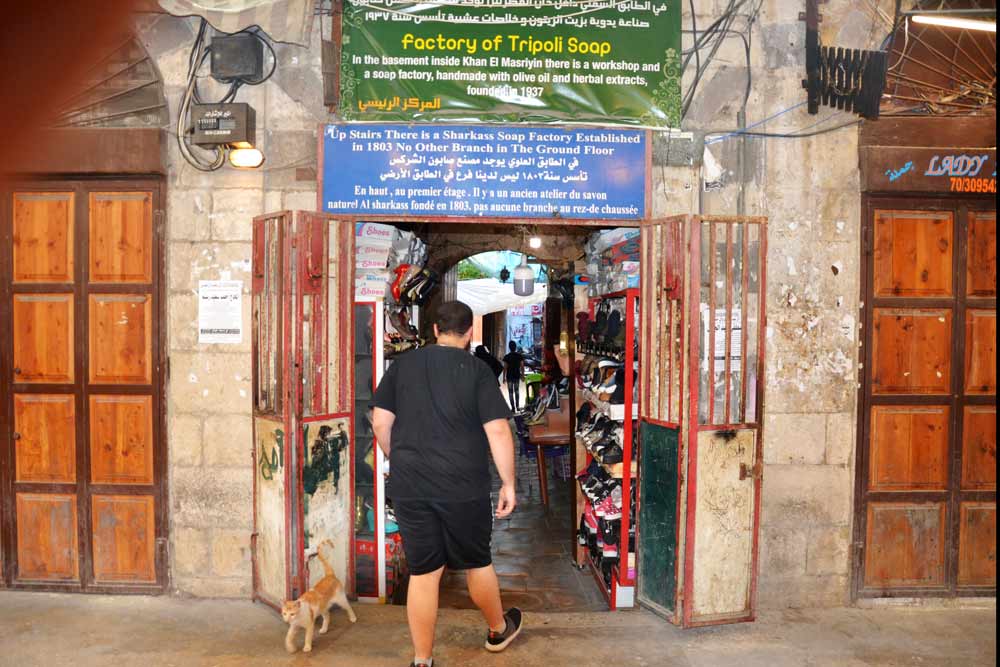 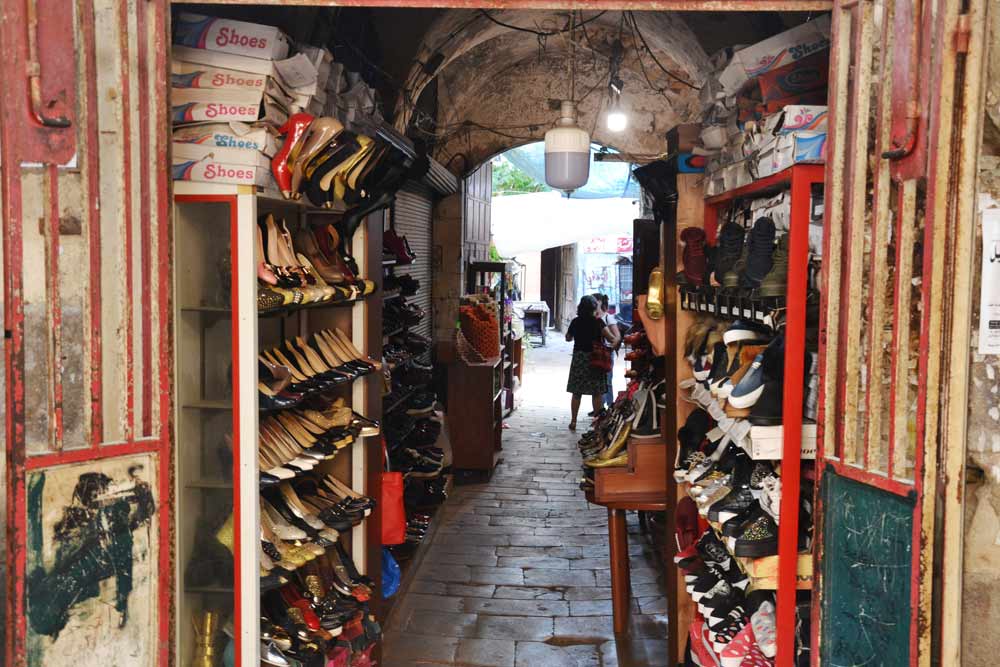 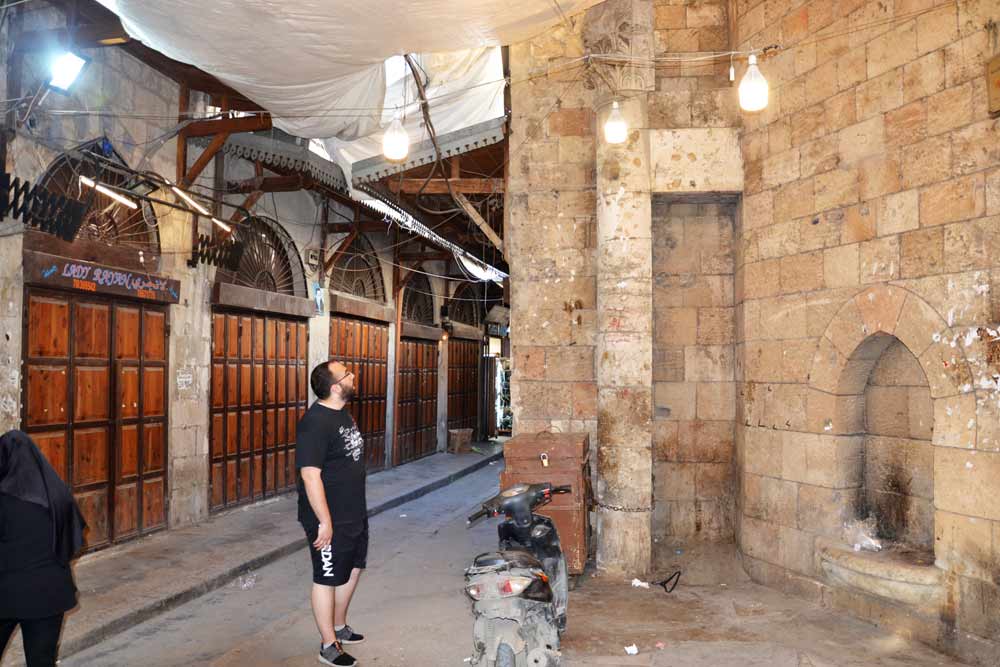 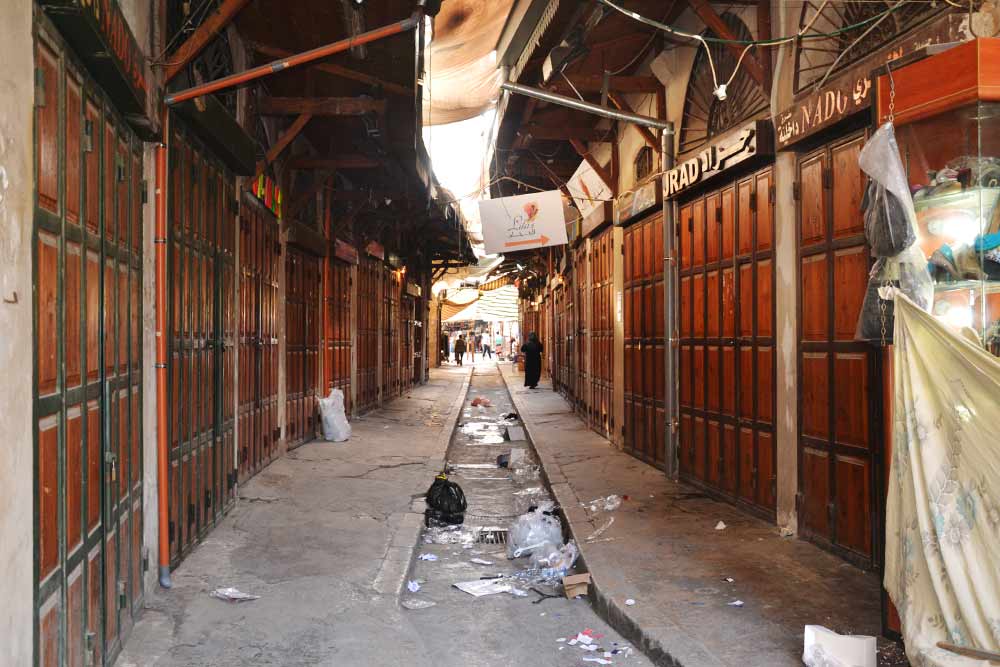 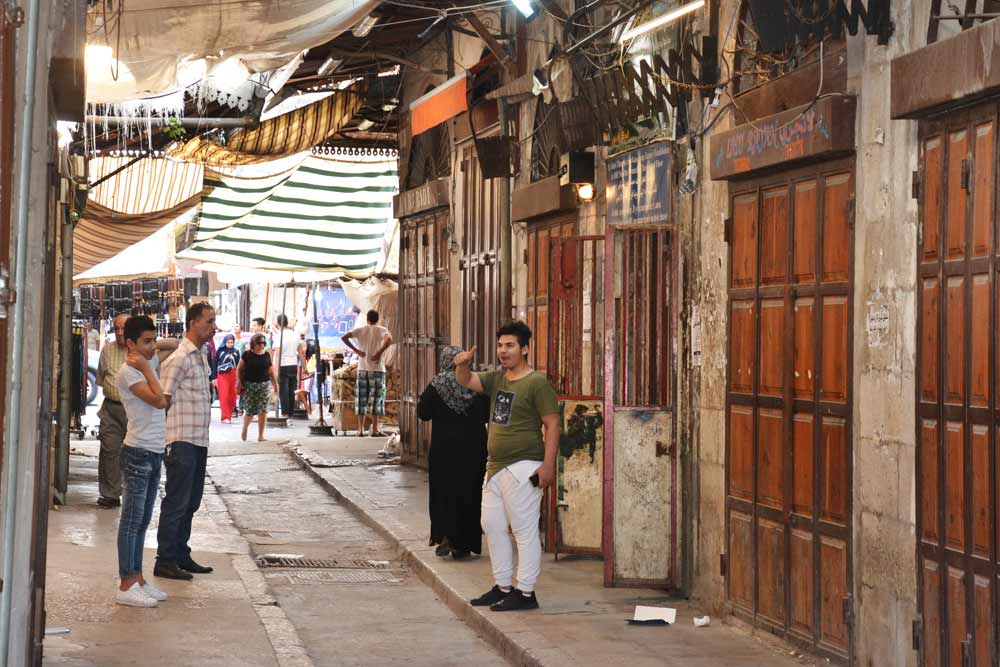 Provisional plans for ground floor and first floor after renovation 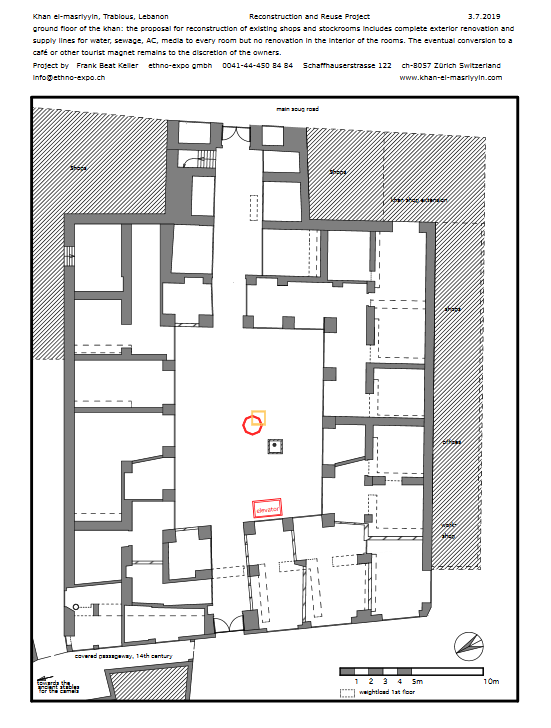 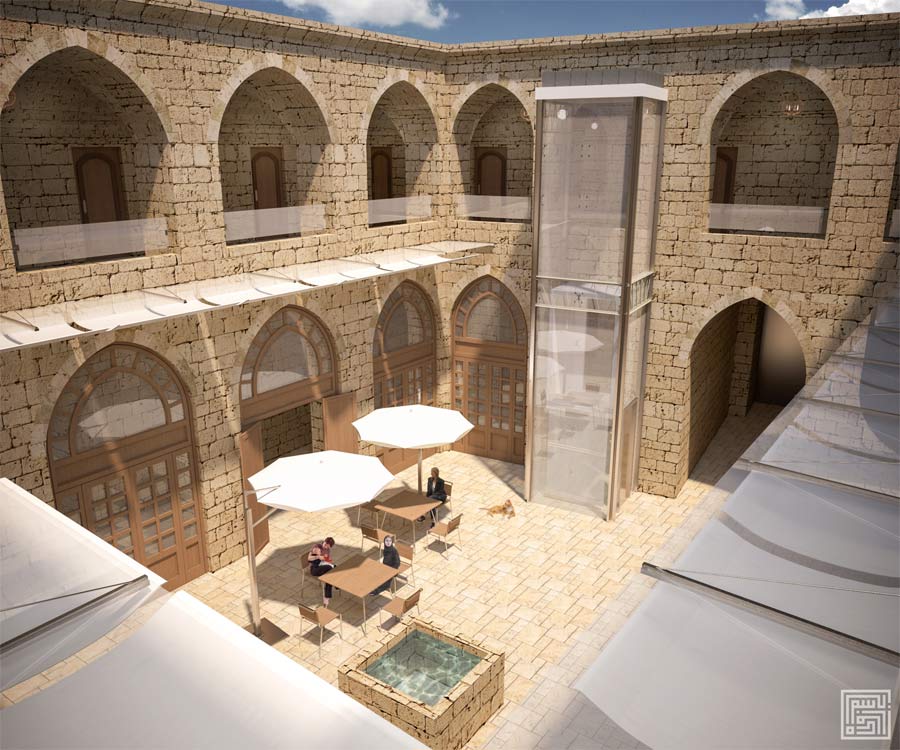 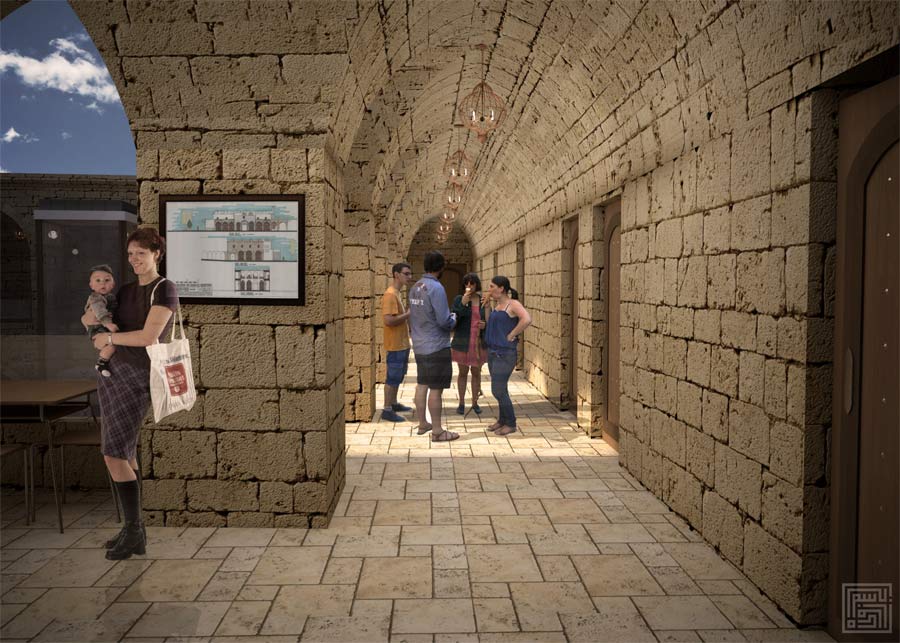 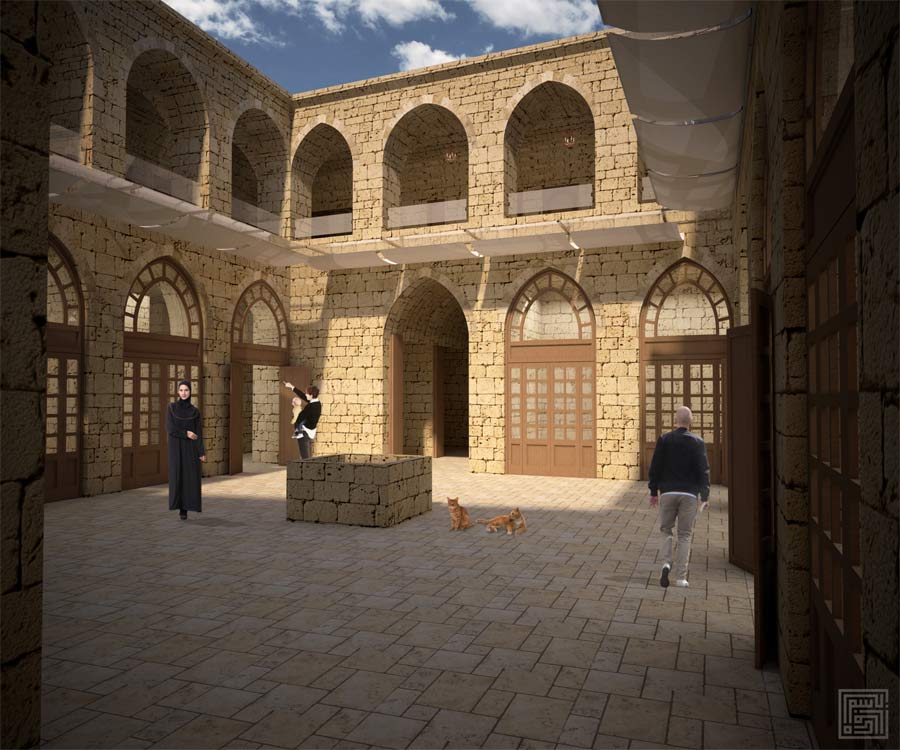 3D-renderings of courtyard after renovation 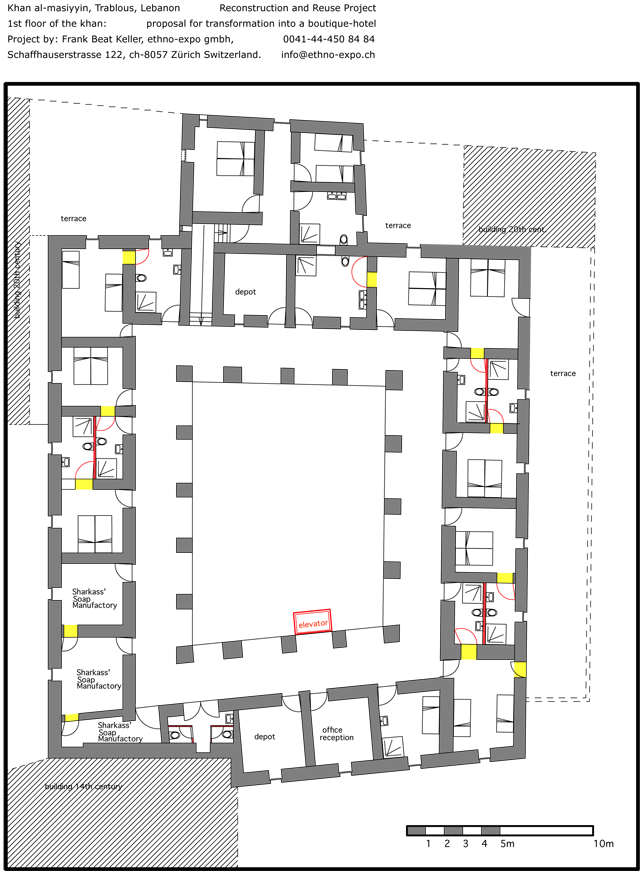 Renovation and Rehabilitation of the Caravanserail of the Egyptians in Tripoli, Lebanon

The objective for the year 2026
The two-storey caravanserai (Arabic: khan) with its courtyard and fountain dates from 1320 and measures 28×28 metres (5’000m3 enclosed space). During the Silk Road era, it served as a warehouse and accommodation for traders. Today, the ground floor houses a few small shops. The upper floor is empty – except for a soap production. The inner courtyard is used as a rubish dump. This does not correspond to the significance of the building. It is to be renovated and revitalised; a “boutique hotel” (8 guest rooms) will be established upstairs, and on the ground floor old and newly arrived small shops will attract their customers.
The project has a good chance of success: the owners and tenants will stay, some empty premises will be put to new commercial use. The hotel manager will keep the courtyard clean. It is important to respect the acquired rights and to run the Khan in a sustainable and commercially sound way. Unfortunately, the idea of establishing a cultural centre there is out of the question because of the lack of funding.
The project will generate some jobs – even after the construction phase. However, it is above all a sign of successful reconstruction in the crisis-ridden country with its guiding principles: “reclaim the neglected old city”, “sustainable and commercially self-supporting”. It is a symbol of hope in a country from which young people emigrate because they see no way out. Not only those directly affected will benefit; the project will radiate into the city and trigger tourist visits and overnight stays.

State of affairs at the end of 2022, budget and next step
That is why the ethnologist and reconstruction specialist Frank Beat Keller founded the association “Les Ami·e·s du Khan” after much preparatory work. It is recognised as a non-profit organisation and supports the project.
In the winter of 2022/23, all prerequisites for the building application have now been met, many personal relationships have been established with the help of Youssef Dabliz, and a sustainable network has been created. Keller has therefore commissioned local architect Bassem Zawdeh to draw up the necessary documents. Keller (b.1951) has 30 years of experience in the renovation of listed buildings; Zawdeh (b.1992) studied in Lebanon and trained as a monument conservator. The renovation will cost approximately USD 2.6 million and will be completed in 2026.
To function well after the renovation, it a hotel is necessary. Its operator will be interested in keeping the Khan’s public spaces attractive and clean. The investor and operator who will bear the cost of the interior can be found as soon as the renovation is secured.
All expenses so far have been privately pre-financed by Keller; for the next step “project preparation and
building permit” the association now needs 200,000 USD.
(Detailed project with floor plans, photos, renderings, budget, addresses: https://karawanserei-tripoli.ch)

Present situation in the Khan
The ground floor has 26 rooms (each 3-38m2 in size), the upper floor also 26 (each 4-20m2). The lockable floor space (without arcades, stairs, passages, courtyard) is 600m2 on the ground floor and 400m2 on the upper floor. No one lives in the Khan; it is closed at night.
Today, the supporting structure of the Khan, including all the vaults, is basically intact, but the building has been neglected and is in very poor condition: the roof is leaking, the surfaces (walls, ceilings, floors) are tattered or sooty. The rooms are dilapidated, some unused for decades. Only a few shops on the ground floor have been renovated by their owners. Free-hanging power and video cables as well as rusted iron characterise the picture, from the outside as well as in the courtyard and the arcades. There are two sanitary rooms downstairs, one drain upstairs.
The rooms on the ground floor are now used as shops (textiles, soap, shoes, laundry, electrical, copperware, electricity) or as storage (for shops in the neighbouring market); some are empty. Some owners use them themselves, some have tenants with contracts from the time of the protectorate, others such according to new law.
On the upper floor, five rooms are used by the traditional soap producer Charkass (production, storage, waste depot, sales); some he has rented, others he uses without a contract. The other rooms are empty.

The renovation and conversion project is widely supported
Keller has visited Tripoli regularly since 2018, became the owner of a room (14m2) and was elected as president of the co-owners’ association he newly founded. In the future, all important decisions will be made at the general meetings with a majority of the 54 voting rights. Personalities from politics, the university, “old families” and trade sit on the already determined board. Individual owners are already thinking about projects for the time after the renovation (cafés in the inner courtyard, etc).
The project has met with a very positive response and broad acceptance, both locally and nationally. Letters of recommendation in favour of the project have been received from the former and the current Mayor, the president of the Chamber of Commerce, the director of the Directorate General of Antiquities in Beirut (Ministry of Culture) and the head of the Real Estate Administration of the Islamic Foundations Waqaf (as spokesperson for the Mufti). The support of the religious authority is eminently important for the strongly religiously oriented population of the Old City. (Download all documents: here).
The managing director of the Waqaf helps with advice and action; the national institution CDR (Council for Development and Reconstruction) supports with plans, ideas, documentation, and regarding materials. The CDR has supervised many similar projects throughout the country. The Université Libanaise has provided the results of previous studies (plan documents), the Ottoman courts in Tripoli have opened their archives.
The Embassy of the Swiss Confederation in Beirut has promised logistical support. The current Prime Minister Najib Mikati was informed on the occasion of two audiences in 2019 and 2020.

The history of the Khan – built around 1320
The caravanserai was built by the Mameluks and is a national monument. The Mameluks had conquered the old port city of Tripoli (today “el-Mina”) from the Crusaders and moved the city away from the coast 5km inland to the foot of castle hill, where there was a Christian settlement at the time. The town at the harbour, they said, was too diffucult to defend.
The Khan stands at the crossroads of two important overland routes, Beirut-Homs and Damascus-Beka’a sea port. This is where people crossed the Abu A’li River for thousands of years, and from here they reached the hill where there was a place of worship. Various sanctuaries stood on what is now the citadel hill, one god taking over from another. It is therefore highly probable that for at least three thousand years there had been buildings at its foot for the care of the pilgrims, of which, however, nothing can be seen any more.
This was the centre of the city.

The architectural heritage of the Mameluks in the port city of the Silk Road
Today, Tripoli is – after Cairo – the city with the most evidence of Mameluk architecture. Many mosques and Koranic schools were built at the beginning of the 14th century, as well as some secular buildings. The Hamman Ezzedin from around 1296 (no longer in use today) and the Mosque el-A’attar from 1350 (on the foundations of an early Christian church) are located in the immediate vicinity of the Khan. They are also listed monuments.
The buildings show the typical facades decorated in Ablaq style alternating the black and white stone blocks.
This architectural style originated in Damascus in the 9th century, spread to the levant, and was rapidly copied in Venice (Doge’s Palace and many “fondacos” on Canale Grande), Pisa (Leaning Tower) and Florence (Cathedral) from the 14th century onwards, and later from there all over the world. The Mamelukes conquered Syria and Palestine from the north as far as Egypt, and a lively trade was established: Egyptian cotton for sheep from the Levant and for fabrics and spices that came on camels along the Silk Road from Persia, the Gulf and Inner Asia. The khan was built and fortified as a hostel and warehouse. The embrasures prove this. They protected traders and goods for weeks and months until their partners arrived at the nearby port or from the desert. The goods were unloaded, stored and negotiated on the khan’s ground floor, the camels watered at the well and taken to the nearby stables. The traders slept on the upper floor in the small rooms.

The Ottoman conquest in the 15th century – the Khan belongs to Suleiman’s favourite.
It is not until two hundred years later that there is written evidence. A contract of sale from the Ottoman Sharia Court Archives of Tripoli describes a room as part of the religious endowment (Waqf) of the “Haseki Sultan”, the “Sultan’s favourite”. She was known in the West as Roxelane (c.1503-1558).
She had been abducted as a girl in today’s Ukraine, bought around 1514 by the Ottoman ruler “Suleiman the Magnificent” at the courtesan market in Constantinople. In the harem, she soon rose to be his favourite companion because of her abilities – ahead of his legitimate wives. In 1534, he set her free so that he could marry her, who had already given birth to their first son around 1521. Then she became his close and influential partner, as testified by the love correspondence which can be consulted in the Topkapi Archives in Istanbul. As his most intimate advisor, she became the most powerful woman in the world at that time, more effective than the queens of England and Spain or the empress mother in China. Roxelane was active throughout the Ottoman Empire and promoted Sufism-oriented religious (educational) institutions in Constantinople, Damascus, Jerusalem, Cairo and Mecca. She also subsidised charitable institutions and took care of their restoration.
It was only later that the arcades of the caravanserai on the ground floor were closed and merged with the storage rooms. In Ottoman times, the markets (souqs) along the former thoroughfares became increasingly important, and the caravanserai merged with them.

Additional added value: education and training for Syrian refugees
The mayor of Tripoli explicitly agrees that Syrian refugees are allowed to be trained on the construction site, so that they can contribute to the later reconstruction in Syria. Architect Zawdeh has already taught Syrians in similar projects; for general subjects, the assistance of two Lebanese women with experience in education for adults has been secured.